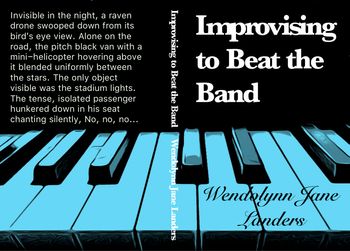 Improvising to Beat the Band

This book is exemplary in character appeal (or interest) and development. All main characters (including antagonists) are unique and fully fleshed out with compelling, layered motivations and traits. Secondary characters are unique and have a meaningful purpose.

Improvising to Beat the Band is a compilation of three novellas: Dieting after she Died; Love & All Its Glory (Is Never Going to be for Me); and Just Let Time Pass.

Wendolynn Jane Landers started the "Dieting after She Died," series on her self-titled blog in 2014. The first book with the series title was available in paperback in September of 2015. Wendy Landers completed the second book in the series, "LOVE & all its glory IS," in September of 2016. The last book in that series, "Just Let Time Pass," was published in September of 2017. The abridged series compilation, Improvising to Beat the Band, was first available to the public in May of 2019 when the previous novella titles became out-of-print, although there are previously read paperbacks still available. The series chronicles the travails of a popular songwriter, Manon, as she recovers from illness and learns to write again.

Wendy Landers' master's degree is in Applied Social Research, a.k.a "polling." She currently resides in Arizona.